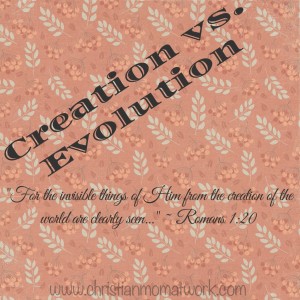 Our family was blessed to have the opportunity to view the Creation Debate between Ken Ham and Bill Nye when it was presented live on February 4, 2014.

As a Christian, I was especially excited to see how Ken Ham answered difficult questions using the Bible AND observational science without one contradicting the other.  I think it’s important for Christians to understand how the Bible relates to science and be able to make a stand when challenged.   I also want to share some of my own thoughts with you about the debate.  If you were not able to view the Creation Debate when it was originally presented, I invite you to view it now:

Creation versus evolution is a age-0ld debate, and one that I don’t think will be settled until Jesus returns.  Even then, I anticipate that there will still be doubters.  Why is there even a debate as to the origins of the Earth?  I think it stems from the fact that there are those who are uncomfortable with the idea of having a sin nature, a righteous God, and a choice between Heaven and Hell.  I believe that because people do not want to accept the Truth, they keep searching, trying to find something outside of God to explain everything.  They do not need to search, the Bible clearly tells us:

“For the invisible things of Him from the creation of the world are clearly seen, being understood by the things that are made, even His eternal power and Godhead; so that they are without excuse:” ~ Romans 1:20

God, through the Bible has answered all the questions!  The more evolutionists search for other answers, the more confused they become.  They fill in the gaps of their information with assumptions.  Then they tell the world that these assumptions are fact. These new “facts” find their way into museums, the news and ultimately children’s schoolbooks!

One of my favorite lines from the debate came from Ken Ham.  “There is a Book…” Bill Nye kept shrugging off the Bible as the literally true Divine Revelation of our very real God.  Every time someone challenges the validity of the Bible, this verse comes to mind:

“For we have not followed cunningly devised fables, when we made known unto you the power and coming of our Lord Jesus Christ, but were eyewitnesses of his majesty.” ~ 2 Peter 1:16

Overall, both gentlemen handled themselves well.  I think Bill Nye was a little on edge, especially towards the end of the debate.  He seemed to have a lot of knowledge, but I don’t think he presented himself as an expert on all of which he spoke.  Ken Ham appeared to have a little more decorum, and appeared to be much more well versed in all of his presentations.

I will admit, that sometimes Christian speakers will often  make me wince internally if they are too heavy-handed.  This was not the case with Ham.  He spoke the Truth in love.  Nye, on the other hand, was a little irritating to me each time he referred to “Ken Ham’s Creation Model”, and “Ken Ham and his followers”.  To be clear, this is God’s creation model, and we are His followers. He also kept referring to secular scientists as those on the “outside”.  I believe he meant that in a derogatory light, but I guess, in a sense, he is correct.

Ken Ham did an excellent job of presenting science from the viewpoint of scholarly Christian scientists.  He clearly explained the difference between historical and hands-on science.  Bill Nye and his camp would like us to believe that Christian and scientist can never be legitimately linked together.

As long as scientists keep searching for the truth outside of the Bible, there is just going to be more confusion.

The people at<a href="http://www click for more.answersingenesis.org” target=”_blank”> Answers in Genesis and the Creation Museum do a great job of using science and the Bible together to help us understand the world around us.  I encourage you to look at their websites for information rich in facts!